NEW CIRCLE OF FRIENDS, CHEERFUL PEOPLE AND CONVERSATIONS ABOUT CRUCIAL with a mug of warm autumn tee

Half past seven. Cozy evening of November. We’ve been warming our hands by candles and our soul by poems. When all the guests get their drinks, our evening was started. By the way, some home-made fruit teas become the special proposition of this season. Сranberry, ginger-lemon and blackberry. Sounds delicious, yep?)

Audience just kept such a silence for a while , as spectacularly was the view on a screen, as fabulous was the sound. All of guests were having goosebumps , just when song ‘Isn’t mine’ by Kozak system was being played. Do you know, that initially it was a poem, written by Symonenko?) We would talk about it later. We’ve listened some other songs of this band and thus, in the second part of our event, we discussed the course of life of different mans of the sixties. It was really interesting to know, that only thanks to Borys Olinyk lots of ukranian writers, such as Lina Kostenko, Vasyl Symomenko, G. Tutunyk was able to publish their poems and works. We’ve been listening to classical poetry and then all of guests had an opportunity to read their own. By the way, to our occasion was invited young poetess Ann Isheikina, who has just published her own book ‘Starlighters’. Can you imagine, that she is just 14?! Another special guest – Valentin Kramarenko, who often takes part in such poetical events was pleased us by his presence. At the end of his speech he said ‘ You are not a poet, if you do not love’. I figured, all, who was in the evening will remember those quote. Anuta, in she’s turn, was inspiring to live! Ye, you’ve heard right – TO LIVE. To live full life and do make some relax to yourself. ‘If you’re exhausted and you really feel revulsion to studying now – just let it down.’ – said she. ‘Go for a walk, watch film, cook pancakes – whatever, really. And I promise, that only after it, your study-time will be productive’.

The enterprise passed really great, so that we even do not pay attention on time. According to lots of thanks and yours propositions ,we decided to make such kind of evenings regular. We would call it ‘gather together’ and we’ll do it in order to other memorable days. Hope, you’ll like it. Follow us on Facebook in Instagram to be aware of news.

Million hugs. Take care about you and your family. 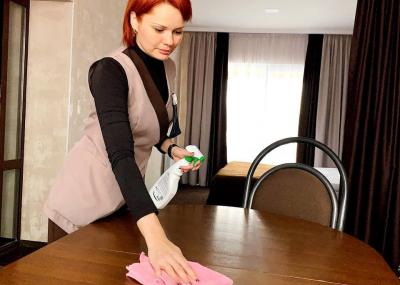 Cleaning services
We are glad to tell you that we’re launching a new cleaning-service from qualified maids of our complex.